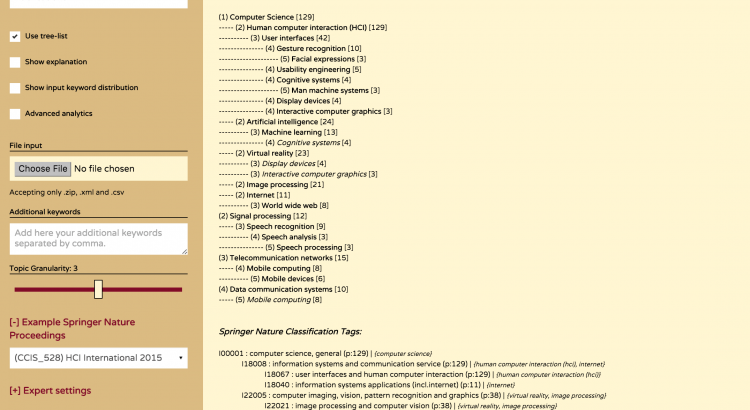 STM was developed to support the Springer Nature Computer Science editorial team in classifying proceedings in the LNCS family. It analyses in real time a set of publications provided by an editor and produces a structured set of research topics and a number of Springer Nature Classification tags, which best characterise the proceedings book. Indeed, if you regularly publish in the main Computer Science conferences, your work was probably already classified and indexed by using STM. **

During the classification of proceedings, editors are involved in different tasks and one of them is determining the list of related terms and categories. This is accomplished according to their own experience, like exploring titles and abstracts visually. However, this appears to be time-consuming as well as complex to perform. In addition, new emerging topics may not find their space while some other current topics could be considered still popular.

The STM engine analyses a set of papers and returns a taxonomy of the most significant topics structured according to an automatically generated ontology of research areas, a taxonomy according to the Springer Nature Classification, a number of analytics, and optionally, an explanation for each topic, in terms of the keyword distributions that triggered the topic recognition.

A public STM demo is available at http://rexplore.kmi.open.ac.uk/STM_demo/.

Differently from other applications which characterise a text with topics, STM produce a full taxonomy of the relevant research areas rather than a flat list of keywords or categories. This helps editors and users to understand the context of each topic and its relationships with other research areas. **

** Note: This article is partially taken from its original version written by Francesco Osborne on: http://technologies.kmi.open.ac.uk/rexplore/wordpress/2017/01/18/smart-topic-miner/