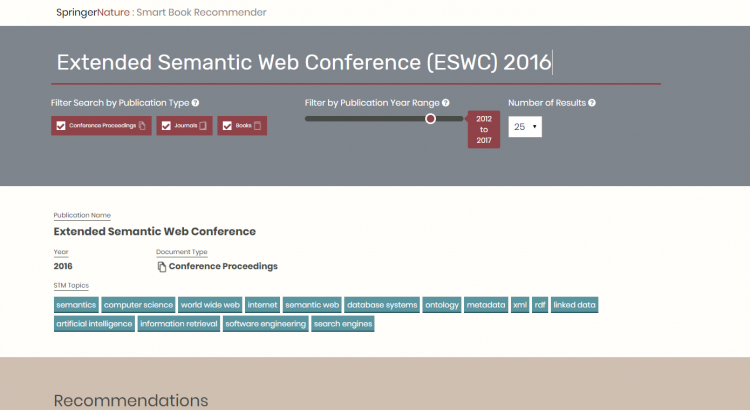 The Smart Book Recommender (SBR) is a semantic application designed to support the Springer Nature editorial team in promoting their publications at Computer Science venues. It takes as input the proceedings of a conference and suggests books, journals, and other conference proceedings that are likely to be relevant to the attendees of the conference in question. It does so by taking advantage of a semantic representation of topics, which builds on a very large ontology of Computer Science topics; characterizing Springer Nature books as distributions of semantic topics; and approaching the problem as one of semantic matching between such distributions of semantic topics.

SBR stems from the ongoing collaboration between Springer Nature and the Knowledge Media Institute (KMi) of the Open University, which has produced a number of other innovative solutions, including Smart Topic Miner (STM), a semantic framework for classifying academic documents, and its API, the Smart Topic API. Since January 2017, STM is being routinely used by the SN Computer Science editorial team, halving the time for classifying conference proceedings. Similarly, SBR is in line to be adopted to support SN editors in selecting the best set of books to market to the participants of a conference.

A demo of the SBR prototype is available at Smart Book Recommender.