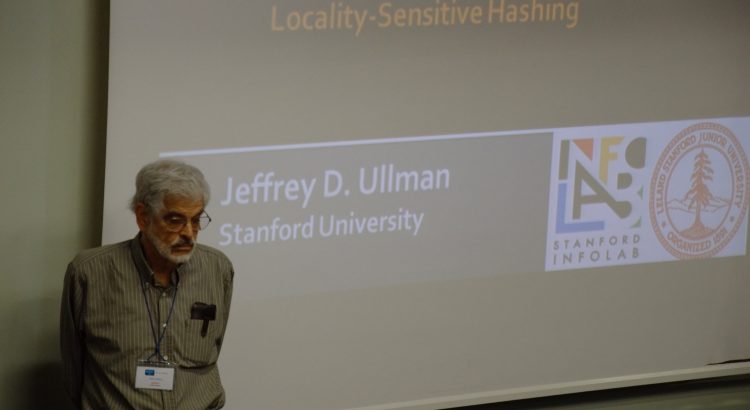 This week I have been attending the 3rd edition of the Big Data winter school: BigDat2017. It was held in my former campus, at the University of Bari (IT). It was a really nice feeling to be back for a while, sitting on those benches and following courses, once again.
Big Data has recently gained a lot of interest in research and many believe that it will still play its leading role for many years. Nowadays, we live in a world in which all information seems to be available, we are surrounded by data-driven applications (Google, Facebook, Twitter, Spotify, just to name a few), which gather data and try to provide tailor-made solutions for their users. To this end, having such event like BigDat2017 with its clear mission —introduce and update new researchers into this fast advancing research area—is really important.

Throughout the week, BigDat2017 offered 22 classes covering a wide variety aspects and applications centred around the Big Data such as modelling, management, verification, security, sentiment analysis, recommended systems, signal processing and so forth. Among the lecturers there were several authorities in their respective fields. Here are just few names:

and many others. Each professor delivered a 6 hours course.

With the combination of both the relevance of the subject and the quality of the speakers, the school reached an audience of more than 350 participants including graduate students, postgraduates, postdocs and companies.

Among the already over-busy schedule, there were other events. On Monday morning, researchers from the University of Bari (Appice and Ceci) explained their role regarding to the Big Data, describing the projects they are have been working on. On Tuesday, Sonia Bergamaschi, showed the main activities on Big Data of the National Interuniversity Consortium for Informatics (CINI), which is the center for all academic researchers in Computer Science in Italy and coordinates scientific activities of research.

On Wednesday morning Bliese, Fox, Giannakis and Pfahringer held a panel discussing about current challenges and opportunities that Big Data offers. Although it lasted just about one hour, many students had the chance to grasp panelists’ experience. Many questions were related to some daily basis issues: incompleteness, noise, outliers, dimension, streaming and so on. In that evening, two researchers from Digital Trasformation Team described their vision of a digitalised Italian government. In particular they talked about some ideas and services they want to provide to the different public administrations, if they are willing to release their data (which is one of the problem they are still facing).

On Thursday morning, Damiani from the University of Milan showed Toreador H2020, which is an architectural framework for Big Data analytics. It contains a set of components that can be combined to create a model for data analysis. This project provides easy solution for those companies that are starting to beat their path into Big Data, but cannot afford many resources.

Lastly, on Friday morning, Quercia from the Bell Labs (Cambridge, UK), talked about the research he conducted in the recent past years. In his talk he spread the idea of “Shortest paths to happiness”, in which thanks to a collaborative game. In this game users define their feeling on pictures of streets, then his approach is able to provide shortest paths based on people taste and that can make your journey more pleasant.

I think the winter school hit the nail. It accomplished its mission. All the professors did an amazing job in delivering their courses. I had the chance to acquire new perspectives on Big Data and prepare myself for the next few years coming. However, on the organisation perspective there are some few aspects that I didn’t like and I really hope that for the next editions the organizing committee will take into account what follows.

Let’s start from the schedule. As already mentioned it was too busy. 10 hours per day plus one hour seminar. Very difficult to keep high concentration for that long during the day. We can argue than nobody forces us to follow all the 11 hours, but I am a student and by definition greedy of knowledge. In addition, there were three courses at the same time and you had to choose one. In many occasions, I wanted to follow courses that were overlapping, but it was impossible.

Lack of coffee breaks. In all the summer schools I attended in the past there were coffee breaks. 30 min. Pausing for a while helps to earn back some energies. It also allows networking (which is something I will discuss after). Fortunately, the coffee was available in the courtesy room, but unfortunately from one class to another we didn’t have enough time.

Networking is considered one of the main activities we, as researchers, are encouraged to do. It helps us to create opportunities for the future. At this winter school it was an issue. It was very difficult for me to find people sharing my same interests. I like to believe that these kind of events are created to, among the other things, foster networking among the participants. One fair attempt to this, was the one hour “open session” on Wednesday evening, where few participants had 5 mins slot to explain their research. For time constraints it was split into two parallel sessions. I believe that this approach was a failure, because not all the participant had the chance to talk. In addition, the combination of the fact that it was already late and many participant went already home, and that we were not allowed to ask questions, has led the audience to not be properly engaged. One possible way could have been a poster session, as in many summer schools do. Usually, participants are asked to bring a poster that depicts their research, so that roaming through the different posters it makes a lot easier to find potential collaborators.

Social engagement on Twitter. Nowadays, many events are supported by their presence online, perhaps on Twitter. News, famous quotes, pictures are the main shared activities. The official profile (@BigDat2017) was in silent mode. Also the tweets with the hashtag #BigDat2017  were not that many during the school. Is it because the audience was not socially engaged? Is this related to the muteness of the official account? Is it just simply correlation or there is causality effect? Who knows. Let’s run an experiment. 🙂

Anyhow, apart from this few things, the winter school was really worth it. I had a nice experience, I had the chance to learn something new and to meet cool professors. And all of this happened in my beautiful Bari. I strongly believe I played well in attending it.

The credits for the photo at the top of this post belong to the staff of BigDat2017. Caption: Prof. Ullman was about to start his lecture

Working with data we need to find a good trade off between safety and privacy @bigdat2017 #bigdat2017 pic.twitter.com/0CoSt4BCS8

Language in American Males vs. Females: