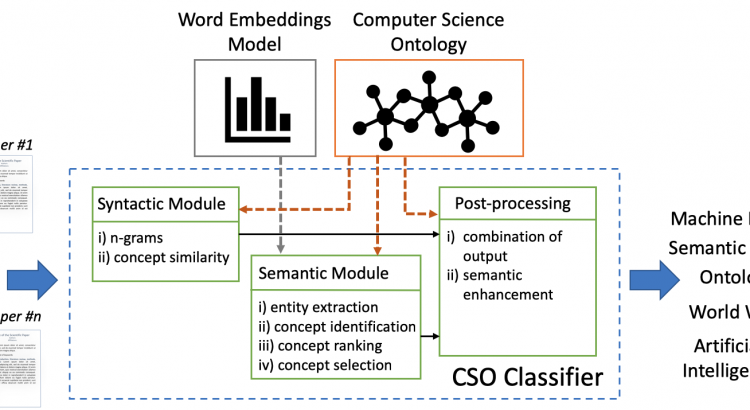 We are pleased to announce that we recently created a new release of the CSO Classifier (v2.1), an application for automatically classifying research papers according to the Computer Science Ontology (CSO).

Recently, we have been intensively working on improving its scalability, removing all its bottlenecks and making sure it could be run on large corpus. Specifically, in this version we created a cache version of the word2vec model that allows us to directly connect the words within the model vocabulary with the CSO topics. In this way, the classifier is able to quickly retrieve all CSO topics that could be inferred by given tokens, speeding up the processing time. In addition, since the cache weighs only ~64M, compared to the actual word2vec model ~366MB, it allows to save additional time at loading time.

Thanks to this improvement the CSO Classifier is around 24x faster and can be easily run on large corpus of scholarly data. At the moment, the classifier is able to annotate 1 paper in around 1 second, which we consider a great achievement since the very first prototype was requiring around 20 seconds per paper.

The classifier is available through a Github repository: https://github.com/angelosalatino/cso-classifier, but you can download the latest release (version v2.1) from:

The function running the classifier allows you to set two parameters: (i) modules and (ii) enhancement. With the first parameter you to decide which of the two modules to run. If you are looking for more precise results and lower computational time (0.5 sec for paper) you can run only the “syntactic” module. Instead, if you are looking for more comprehensive results (with a slight impact on the precision) you can run “both” modules. With the second parameters you control whether the classifier will try to infer, given a topic (e.g., Linked Data), only the direct super-topics (e.g., Semantic Web) or all its super-topics (e.g., Semantic Web, WWW, Computer Science). Using “first” as value, it will infer only the direct super topics. Instead, if using “all”, the classifier will infer all its super-topics. Using “no” the classifier will not perform any enhancement.

Other info, including how to run the classifier on a single paper or in batch mode are available within the README file within the repository/release.